You can download Episode 11 from here… you can also check out the feed or try your favourite podcast index.

This episode will explain the local (mainly Anshanite) context for the rise of Cyrus, as well as telling a bit about the version of the story of the birth of Cyrus told by Herodotus.

2- Here is a useful article on the site of Malyan/Malian (ancient Anshan) and the archaeological excavations of it.

3- Another article on the description of Cyrus as presented in Herodotus’ History. 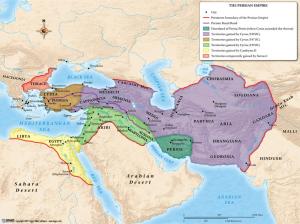 Map showing the extent of the Achaemenid Empire, with the region of Persis showing in dark green, 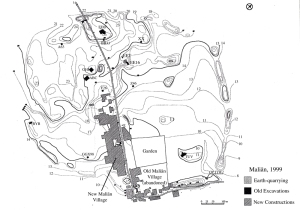 Drawing of the archaeological site of Malyan (Anshan) 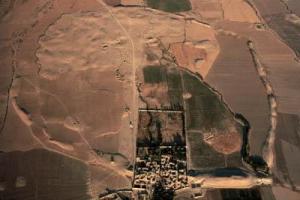 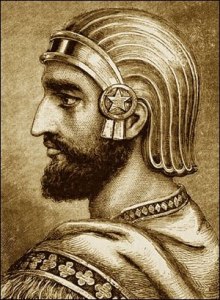 This, often presented as “portrait of Cyrus” is nothing but a fanciful drawing, based loosely on… 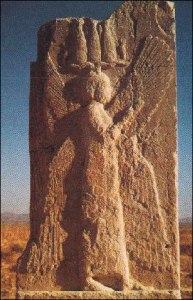 … this relief at Pasargadae. This is known as the Winged Guardian and is actually a composite image.

Finally we arrive at the tale of Cyrus, what you have all been waiting for. Get the episode from here…

This is the introduction to the history of Cyrus, looking at the world in which he started his career. I go from the Mediterranean to China and back to Mesopotamia, surveying the Eurasian world in 550 BCE or so, as well as making some preliminary remarks about Cyrus himself.

Check out the Bibliography for items added for this subject.

The world in the sixth century BCE (a bit idealistic, but gives you some ideas) 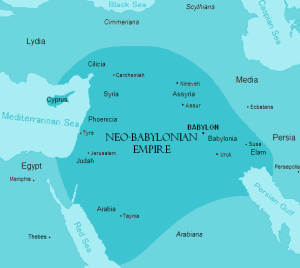 Map of the Neo-Babylonian (Chaldean) Empire 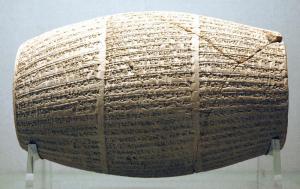 A gold coin from Lydia

You can download the new episode form this link…

As usual, the feed is here.

Names of the characters mentioned

Dioces: the “founder” of the Median Empire according to Herodotus (possibly inspired by the Mannean Diakku, mentioned in Assyrian annales)

Cyaxares: the greatest of the Median kings, according to Herodotus, and the “conqueror” of Assyria. Possibly Umakishtar who is mentioned in the Gadd Chronicle and said by the Babylonian chronicles to be the person who sacked Assur/Ashur.

Astyages: the last of the Median Emperors, possibly Ishtumigu of the Babylonian chronicles. 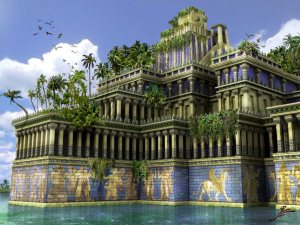 Modern, Artist’s imagination of the “Hanging Gardens of Babylon”

Here is the link to the episode, and the feed…

This, sort of, is just the beginning. The Indo-European, the Aryan, and the Indo-Iranian languages and terms are such thorny issues, and I cannot even pretend to have answered them all. Hopefully this will set the stage for future discussions, and some questions, comments, and discussions here.

Notice that I tend to spell the word Ariia in order to name the “Indo-Iranians” as they are, and to distinguish it from the Aryan, which is used in a modern, political sense.

Check out the Bibliography for some book and article suggestions… 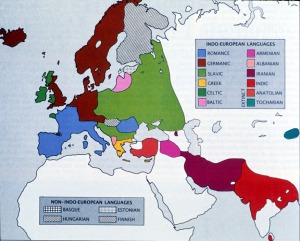 Map showing the extent of the Andronovo and BMAC cultures

If you are interested to know a little more about the people I talked about in episode 6, please follow these links:

The Lullubi: an article from Encylopaedia Iranica. Some images of the relief of Anubanini at Sar-e Pol-e Zahab. If you have a sense of humour, then read my attempt at being funny with the Lullubi, which I published a few years ago online!

Kassites: Again, the entry from EIr. A map of Kassite Babylonia. Here is a bit on Kassites which talks about their origin. Interesting proposal, and a huge bibliography, on Kassite Nippur.

The Gutians: the entry on Gutians from the EIr. Gutian Sumer, in digested form! You’ll see what I mean about people deciding how folk looked 4,000 years ago when you read this, arguing for a ‘Black’ origin of the Sumerians, or this one which has decided that they were Caucasian. This ‘Kurdish argument‘ is not actually half-bad in camparison…

The Manneans: the entry on Mannea from the EIr. Very good review of the Mannean pieces at the Met Museum (it’s a PDF).