Yaghub, the first of the Saffarid rulers, was reputed to have been a coppersmith, hence the name of the dynasty (saffar meaning a coppersmith). Stories of his life, however, reveal him to have been an Ayyar, a class of city roughs who were a staple of mediaeval Iranian cities and who were known to have a serious code of conduct governing their lives. The close connections among the members of the ayyar group might have been the result of their origin in the Sasanian light cavalry troops who were disbanded after the fall of that dynasty to the invading Muslims.

In any case, around 850’s CE, Yaghub, son of Laith, who was born in the city of Zaranj, the old capital of Sistan, is said to have been fighting under the leadership of an ayyar commander named Saleh. The politics of Sistan at the time was dominated by sectarian violence between the orthodox sunnis, supporters of the Baghdad caliphate, and the perpetually rebellious Kharijites forces. The latter held Sistan as one of their main strongholds, occasionally even setting up governments in Bost, and enjoying varying degrees of popularity in the region. This had caused the Baghdad caliphate to mobilize all its forces to drive the sect out of the eastern caliphate, and this was done mainly through proxy powers of the Tahirids. At the time of Yaqub, the Tahirid commander Saleh appears to have been the major force against the Kharijites, and indeed it is under his command that Yaqub is first identified as an ayyar fighter.

Following an amazing heroic deed, Yaqub started rising through the ranks of the Tahirid and local hierarchy and by 860’s was calling himself the Amir of Bost. Sistan, however, was at the time under the nominal rule of the nascent Samanid dynasty of Transoxiana, being ruled by Ilyas, one of the four sons of Asad, the founder of the Samanid line. The struggle of Yaqub against the alien Samanids led to a major conflict in 867 during which, Yaqub defeated Ilyas and sent him to Nishapur in Khorasan. This was then the beginning of the rule of Yaqub and the Saffarids over Sistan.

Establishing his capital in Zaranj, Yaqub then proceeded to conquer the eastern lands, adjacent to his territory. These were the kingdoms of Kabul and Gandhara whose people were not yet fully converted to Islam, at times ruled by local kings, one of whom is known in Islamic history under the name of Rutbil or Zunbil. The conversion of the new lands gave Yaqub the status he needed, and he was finally confirmed by the Abbasid caliph as the legitimate ruler of Sistan. The new found status gave him the base needed to conquer Fars and even Khuzestan, deep into the Iranian Plateau, and even threaten Khorasan which was at the time dominated by the Samanids. The personal conduct of Yaqub did not endear him to the caliph or his rivals, but he seems to have been quite smart and an effective administrator. His life spent in conquests, he died in Gundishapur in Khuzestan in 879.

The greatest extent of the Saffarid realm

Amr b. Laith, Yaqub’s brother and a former mule-driver, replaced his copper-smith brother on the throne of Sistan. He, as well as a younger brother called Ali, were at the side of Yaqub from the beginning of his venture, and Amr had been the governor of Herat since 875. An effective warrior, Amr’s policies directly followed those of Yaqub and can be summarised in the word conquest. Finding himself the effective lord of southern Iran, eastwards from Sistan to Khuzestan in the west, Amr attempted to extend his influence northwards to Khorasan and to meet his main rivals, the Samanids, in Transoxiana. In Khorasan, he was met with a new rival, a certain Rafi’ b. Harthama, who was a former Tahirid commander and now claimed the principality of Khorasan for himself. Amr, pretending to represent and best preserve the interest of the Abbasid caliph, fought Rafi’ for a few years, before defeating him in 889 and coming to dominate Khorasan. This indeed put him in contact with the various little princelings of the Tabaristan region who each were trying to buy the support of the Saffarid amir to strengthen their position. Amr in turn offered his support to the Alavid imams of the area, their highland, Sasanian descended rivals, and local adventurers who were looking for more influence in the region. The actions of Amr, indeed, might lie at the basis of the rise of Deylamite warlords, most famous of them such as Makan, Asfar, and Mardavij managed to gain wide local influence and in the case of the latter, even found lasting dynasties.

It is probably due to his assurance of his western flank that in 900, Amr attempted to attack and takeover Transoxiana, the heartland of the Samanids. Underestimating the rising power of Ismail I, the real founder of that dynasty, Amr was badly defeated in Balkh, captured, and sent to Baghdad as a prisoner. A year later, the Caliph al-Mutadid put him to death.

Having captured Amr, al-Mutadid decided to revive the direct Abbasid control of the Iranian Plateau which the Abbasid had lost to the rising Iranian dynasties such as the Tahirids and the Saffarids. In 901, he captured Fars, but was met by the Saffarid commander, the Turkish born Sebuk-eri. Ruling under the overlordship of the Saffarid brothers Tahir and Yaqub, the grandsons of Amr and joint rulers in Zaranj, Sebuk-eri drove out the caliph and forced him to grant to Tahir the title of the ruler of Fars, while he himself actually ruled both Fars and the adjoining Kerman. In 908, following a rebellion by their cousin Laith b. Ali, Yaqub and Tahir took refuge with Sebuk-eri, but later came to fight him in an ill advised attempt at recovering their direct rule. Instead, they themselves were captured and sent to life-long exile in Baghdad.

The history of the Saffarids after this point becomes one of political fragmentation and conflicts between various members of the family over the rule of major cities such as Bost, Zaranj, al-Rukkhaj, and Farah. This was all in face of the awesome rise of the Samanids, under Islamil I and Nasr II, to the position of supreme power in eastern Iran and Transoxiana. On the other hand, the relatively peaceful politics of central and western Iran was similarly steered by the rise of the Deylamites who initially under the command of the Ziyarids, and later the famous Buyids, conquered most of the plateau and eventually, even drove the mighty Samanids from Khorasan. Pressed against the power of the Buyids from the west, after all Ahmad b. Buyeh had conquered Kerman and established his kingdom there, and the ever present threat of the Samanids, the Saffarids were reduced to local rulers, often paying tribute to either of the great powers. 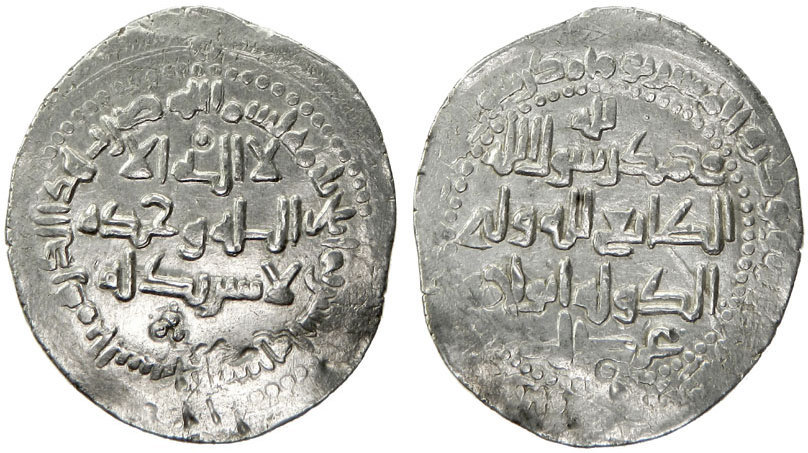 Coin of Khalaf b. Ahmad

This, however, did not reduce their local influence. In 923, the local people of Zaranj chose Abu Jafar Ahmad, a distant relative of Yaqub and the husband of Amr’s granddaughter, as their ruler. Capturing some of the energy of the early Saffarid rule, Ahmad managed to establish a relatively calm zone of influence for himself and even receive taxes from all corners of Sistan. His son, Khalaf I, ruled from 963-1009 and was an effective warrior, wise ruler, and a great patron of arts. Much of what appears as Saffarid ceramics and metal-work, as well as the now-ruined remains of the great cities of Bost and Zaranj, were made under Khalaf’s rule, and his named surely remained as a wise patron in the poems of the many poets he kept at his court.

While the title of the Saffarid Amir, and a centralised Saffarid rule, disappeared after Khalaf, under the pressure of Mahmud of Ghazna’s rising empire, the Saffarids themselves continued to survive. Even until the Mongol invasion of Iran in the 13th century, we still hear of Saffarid amirs at various cities of Sistan, and some of these who have not been mentioned in the texts are also known to us through their coinage. The influence of the Saffarids, as great patrons of art and literature, and as major players in the politics of the 9th and 10th century, of course survived long after their demise.